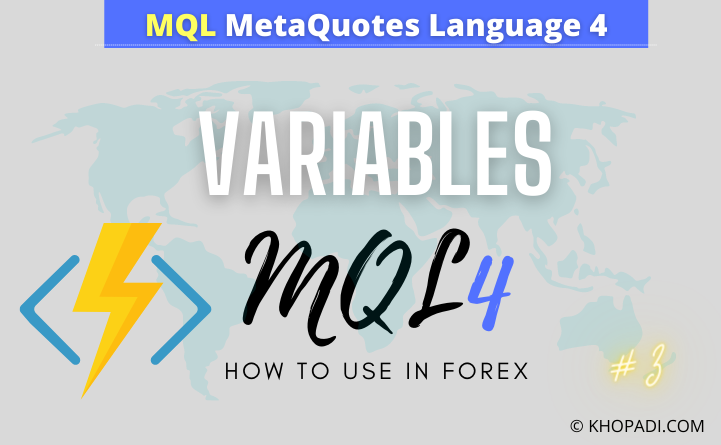 Each Computer Programming language has the option to store dynamic data. which can be used for further operations.
Data:- Meaningful information Set, for desired System Implementation.
For Example, If you are creating a Trading System then Open Price, Close Price, Number of Bars in Chart, Current value of Spread, etc are data. which you can use for the Implementation of the Trading Strategy.

What is Variable in MQL?

Variable is the storage container that is used to save the predefined or user data. The value of a variable can be changed as per requirement.
In MetaQuotes Language (MQL), There are Two Categories of Variables.

The Variable, which is already defined by the creators of MQL. So that you can directly use the Power of MQL and can develop your trading system in a short period of time. In the following, I have listed only important pre-defined variables. which I use in future tutorials.
you can find the complete list here.
I have selected the "XAUUSD" chart on the 5-Minute Timeframe. so that you can see the output of the following code.
Source Code
void OnStart()
{
// we are printing pre-defined variables.
Alert("Ask Price : ", Ask);
Alert("Bid Price : ", Bid);
Alert("Open Price : ", Open[0]);
Alert("Close Price : ", Close[0]);
Alert("Symbol Name : ", _Symbol);
Alert("Digits : ", _Digits);
Alert("Points : ", _Point);
Alert("Time : ", Time[0]);
}

The Variable, which is used to store the data defined by the user.
For Example:-
You want to add Two Numbers and display the sum of these two numbers after storing the value of the sum.
Then, Mathematical Logic says,
You need x,y Two variables, and sum as the result variable (if you are familiar with basic algebra maths)
Suppose:- x = 10  and  y = 20
Thus :-   sum = x + y
and you can simply pass the variable "sum" in Print Function or Alert Function as we have used in our previous MQL Tutorials of ⚡ Basic "Hello World Program" Execution in MQL4
For Programming Implementation, you do something deeper.

How to declare a user-defined variable in MQL?

Note:- Semi-Colon is necessary to put at the End of each Statement of the MQL program. It is called Statement Terminator. It is just like a full stop which you put at the end of the English Language Sentence. 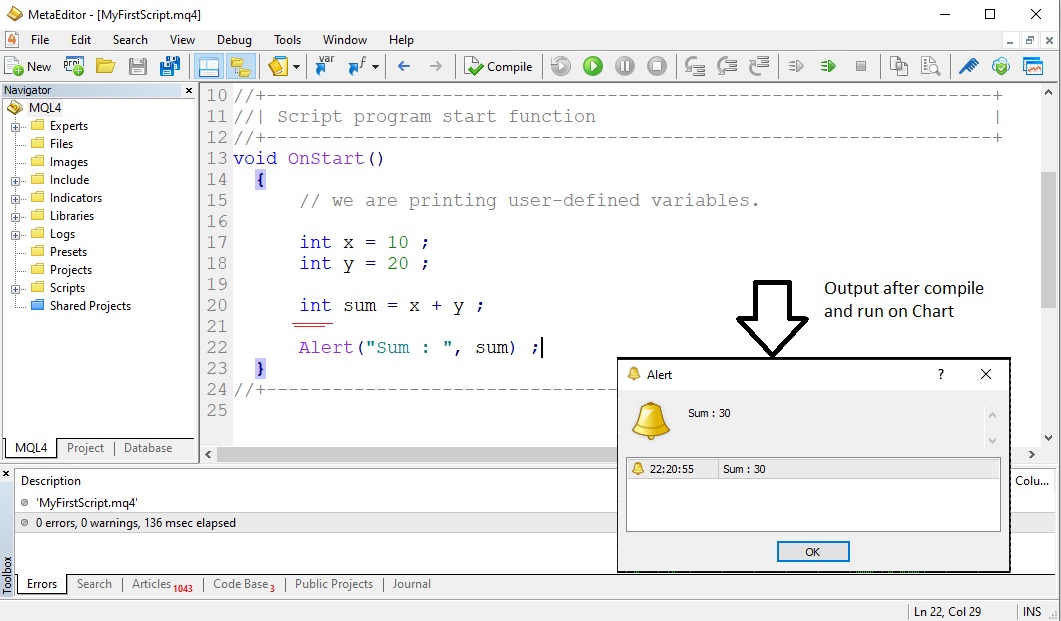 Rules for Variable Name in MQL

You must take precautions for the declaration of a Variable Name. There are some rules related to Variable Names. The variable name is also called an Identifier Name.

Some Examples of Valid Variable Names:-

Some Examples of Invalid Variable Names:-

Variable is the storage container or Memory location in the computer which is used to store data information requested by the pre-defined system or user intentionally. Some variables are pre-defined by MQL. which has specified functionality. Users can also declare variables as per their needs and usage.

⭐ Is Forex Trading Legal in India?