Introduction of MQL Script and use of Comments in MQL ⚡

What is MQL Script?

MQL Script is the program developed for a single execution, which means Script runs only once.
Then the question was raised in your mind, "What is the problem with Single Time Execution?".
The answer is, "There is no problem with Single Time Execution.". whereas you are learning this MQL Computer Programming language for Forex Trading Automation, and the price in the chart change with each tick of Watch. then ???
It's Okay !!!
The Developers of MQL have made a provision of Recursive Program Executors which are run on each tick change of price, called Expert Advisors. we will discuss Expert Advisors in later Tutorials.

You must start learning MQL Script first because of the following reasons:-
In the previous Tutorial of MQL:-  Basic "Hello World Program" Execution
We have created the simplest MQL Script which is printing "Hello World".
void OnStart()
{
Alert("Hello World 1");
Print("Hello World 2");
Comment("Hello World 3");
}
MQL Script has two major Sections:- (* Author Opinion for easy learning)
Tip:- you will find a more depth tutorial on "Function", at that point you can assume that It is part of the code which can perform certain work. this can be denoted by " ( ) ", pair of open and close parenthesis.
OnStart(): This is a pre-defined function, which is the starting point of MQL Script or in other words, Execution of MQL Script is started from here.

Inside the "OnStart" function

Outside the "OnStart" Function

The comment is non-executable code. A comment is not converted to Machine Code when the compiler compiles the "Source Code".
Source-Code: Computer Programming original human-readable code is called as Source-Code.
Machine-Code: Combination of 0's and 1's, which is readable only by computer.
Compiler: The Software created by the original developer of Programming Language, which is used to convert the Source Code into Machine Language code. because computers can only understand Machine Level Code.
Means, Comment is the code which is used for:-

Comment can be write in Two ways as per requirement:-

Single Line Comment is used for Quick Note, like describing the use of a Variable or a Function. 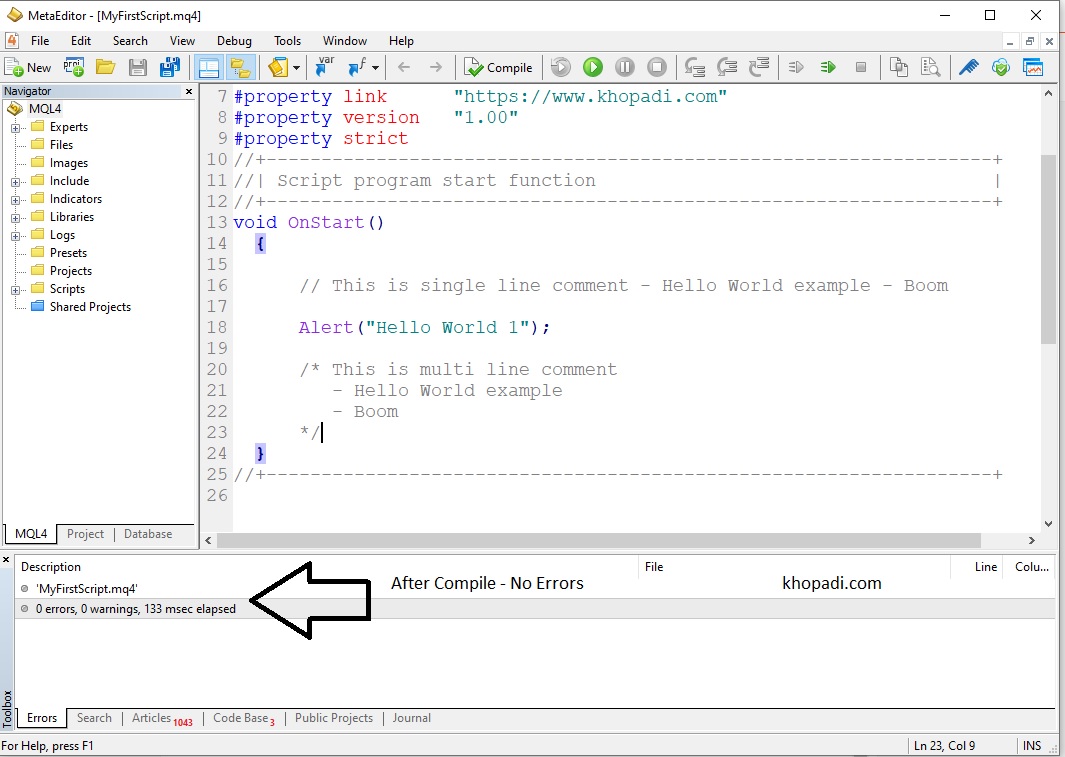 MQL script is used for writing single-time executable code. the beginner in MQL Programming must start from here because it is quite easy to learn. You can write any notes for future use in between the MQL Script as a comment. which is non-executable code either a single line or multiple lines.

💥 Do not start Copy Trading